Some years ago I spent my holidays in Cyprus, an island at the far end of the Aegean Sea, geographilly located under the Turkey. I must say that, before visiting Cyprus, I knew nothing at all about the place, so I made some researches. I read many reports about a beautiful land of contrasts, occupied, destroyed and then, rebuilded many times and in the end divided in two parts: the european one, and the Turkish part. Cyprus nowadays is still divided in two parts, separated from the so-called “green line”: the southern area became the Republic of Cyprus, that includes about the 59% of the surface of the island; the Turkish-Cypriots gather together in the northern part, establishing the Turkish Republic of  Northern Cyprus, which represents the 36% of the Island and which is recognized only by Turkey. As you can see, it’s a “divisive” situation. Also the annexation of Cyprus both in the European Union and in Asia is really controverted. From a historical-cultural point of view, Cyprus can be considered an European state, but from a merely geographical point of view it belongs to Turkey and to the Asian continent.

The Republic of Cyprus became indipendent from Great Britain in 1960. After three year, some violent clashes took place between the two communities. From 1974, the island is divided, after a “coup d’Etat”: the Greek military forces rised up against the cypriot President Makarios: this situation brought to the intervention of the Turkish Army, as well. Before 1974, the two communities lived ramdomnly in the island, there wasn’t dividing lines: after continual battles, greek and turkish had been displaced in two distinct areas : in the South, the greek ethnos, and in the northern part of the Island, the turkish one. The respective assets were confiscated by the armies, and the religious symbols were destroyed; the same happened for the turkish population. The 1974’s conflit was particulary bloody, and brought to the birth of many feuds, social but even familiar, difficult to resolve. For this reason, for the duplicity of the ethnic cleansing which took place, nowadays is still difficult to reunite the two ethnic groups. The cypriots theirselves don’t want to get back together. Nowadays, visiting the island, you can perceive the fact that the two communities (greek-cypriot and turkish-cypriot) mantein two separate identities: they share many traditions, but they have different religion, and deep bonds respectively with the Greece and the Turkey.

Cyprus is also, in its central area, a mountainous island: there are two mountain ranges, the first one in the Karpas peninsula, and the second one of Mounts Troodos, in the South-west of the island, where rise Mount Olympos, the hightest peak of the Island. (1.953 m) The capital city is Nicosia, which is located on the boundary between the two ethnic areas and the city itself is divided in the greek part (south of the city) and the turkish part (nord of the city). Clearly, the city is also the economical and cultural centre of the Island, with its banks, companies and the National Museum. Nicosia is the only big city situated in the hinterland, differently from the other cities which are located near the sea.

Other important cities are: Limassol, second city for population, and principal harbour of the meridional coast. (it’s clearly a turistic area) Paphos, ancient port city, was famous for a sanctuary dedicated to Aphrodite. Here you could visit one of the biggest archeological sites of the island. In the end, there is also Larnaca, in the nearby of the main airport of the island. It’s not particularly recommended for tourism, it’s a commercial city. Maybe you’ll find so much more interesting to visit the Salted Lake at the door of the city, where flamingos “meet up” in winter. However, Cyprus is a beautiful island to visit, with many paradisiac angles, and with interesting well-preserved archeological ruins. I wish to visit it another time, to make the itinerary around the Turkish area and the mountains area of the monasteries: I hope someday to have the possibility to organize it. 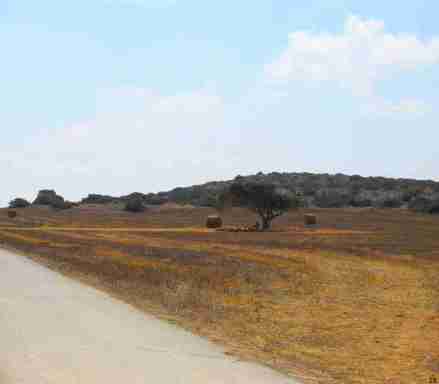 About the tour we made by car, i sure recommend to you some things to do: 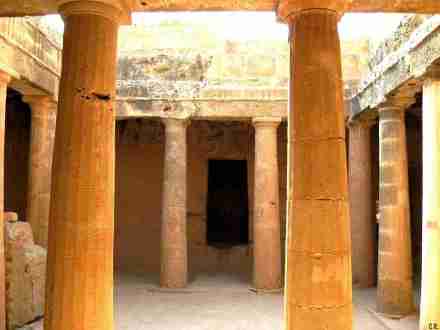 These tombs are impressive enough to be worthy of kings. They are burial caves carved into the bedrock of the hill and decorated with Doric columns and capitals. You can freely walk about the place once inside, searching through the rooms of the tombs, with parts underground carved into the rock. This Necropolis of Pafos is situated on the North East section of the town, right outside the ancient town fortifications. The northern section of this vast Necropolis is known as “The Tombs of the Kings” and covers an area of approximately 1.2 square kilometres. The name of the site is derived from the magnificence of the tomb structures: in many of these the Doric architectural rhythm is evident. These tombs appear to have been the burial grounds of the members of the political and executive elite of the Capital of Cyprus, Paphos, during the Ptolemaic period of reign on the island. The site is adjacent to the main road leading from Paphos to Coral Bay where you may find an array of bars, restaurants, shops, hotels and is very close to the beach.(the return in the civilization after a fascinating silent walk through the centuries) 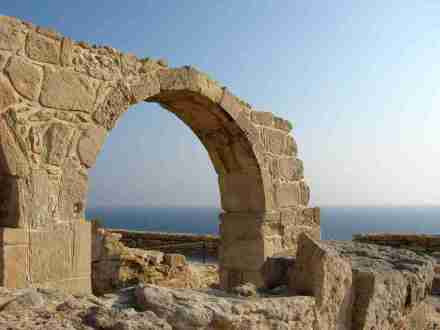 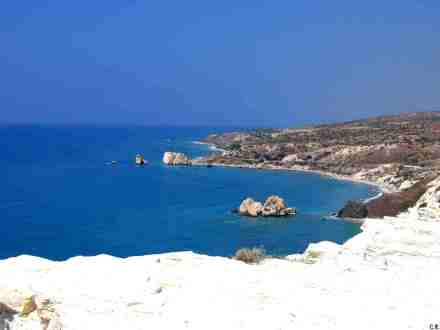 According to legend, Aphrodite, goddess of love and beauty, rose from the waves in this strikingly beautiful spot. The Greek name, Petra Tou Romiou, is associated with the legendary frontier guard of Byzantine times, Dighenis Akritas, who kept the marauding Saracens at bay with amazing strength. The legend said that he threw this large rock into the sea destroying the enemy’s ships. This spot was a place of pilgrimage for the entire Hellenic world. Aphrodite’s presence seems to have drawn other divinities and notable mortals to Pafos. Petra tou Romiou can be reached from the Lemesos-Pafos highway The beach is not really ideal for swimming but lots of women like to take a dip for fun and pretend to be Aphrodite being born from the waves. The water is coldish but there are beautiful colorful pebbles and plenty of room to sunbathe, so one could spend some time here.

One of the main attractions of the ruins of Kourion is, without doubt, the large and very impressive amphitheatre from the 2nd century BC. Although it was originally built as a theatre, it is believed that at some point in time it was used mostly for gladiator games. What can be seen now is an imposing curved auditorium that includes additions and renovations made during the 2nd and 3rd centuries, and which seats some 3000 spectators. The stage currently only preserves its foundations, but it originally rose to the full length of the auditorium. Today the amphitheatre is a venue for cultural events that include music and theatrical performances during the summer months. 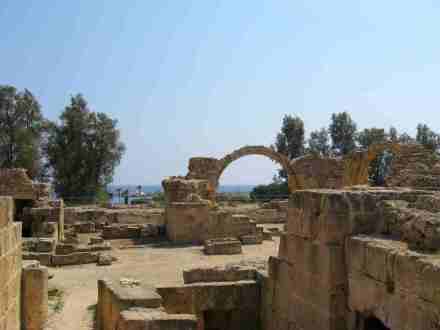 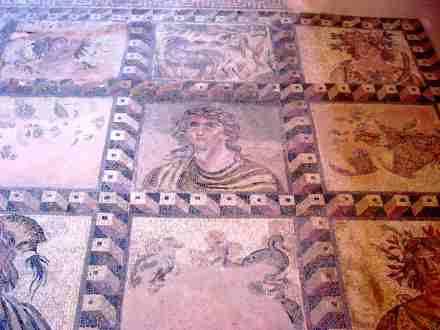 The mosaic floors of these noblemen’s villas dating from the 3rd to the 5th centuries A.D. are considered among the finest in the eastern Mediterranean. Depicting mainly scenes from Greek mythology they were discovered accidentally in 1962 by a farmer ploughing his field. The mosaics at the House of Dionysos tell about the god of wine, while the House of Thyseus takes its name from a mosaic showing the ancient Greek hero brandishing a club against the Minotaur. 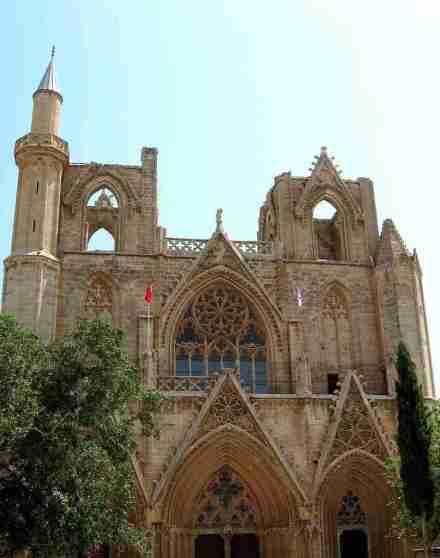 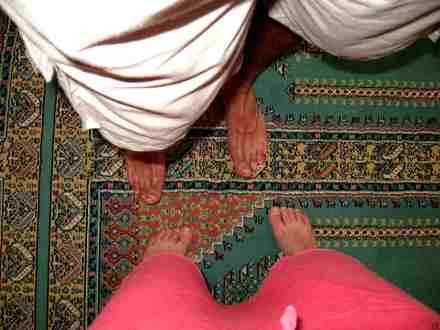 The Lala Mustafa Pasha Mosque (originally known as the Saint Nicolas Cathedral and later as the Saint Sophia Mosque of Magusa) is the largest medieval building in Famagusta, Cyprus. Built between 1298 and 1400 it was constructed as a Christian cathedral in 1328. The cathedral was converted into a mosque after the Ottoman Empire captured Famagusta in 1571 and remains a mosque to this day. The Gothic style of architecture closely resembles the great cathedral of Rheims in Paris, France. The upper parts of the cathedral’s two towers suffered from earthquakes and were badly damaged during the Ottoman bombardments of 1571; they have never been repaired. With the Venetians defeated and Cyprus fallen under Ottoman control, the new cathedral-mosque was renamed the “St.Sophia Mosque of Gazimagosa”. Islamic tradition holds that the depiction of humans, animals and other faiths in their religious architecture is sinful and so almost all of the statues, crucifixes, frescoes, paintings, tombs, stained glass windows and the altar were removed or plastered over. The Gothic structure was preserved however and a few tombs can still be identified in the north aisle. We entered the Mosque with so much deference, for a culture that we don’t know deeply. We were allowed to walk barefoot inside, it was a particular experience.

Salamis is an ancient Greek city-state on the east coast of Cyprus, at 6 km north of modern Famagusta. According to tradition the founder of Salamis was Teucer, son of Telamon, who could not return home after the Trojan war because he failed to avenge his brother Ajax. The earliest archaeological finds go back to the eleventh century BC. (Late Bronze Age III) In Roman times, Salamis was part of the Roman province of Cilicia. Although Salamis ceased to be the capital of Cyprus from the Hellenistic period onwards (when it was replaced by Paphos), its wealth and importance did not diminish. The city was particularly favoured by the Roman emperors Trajan and Hadrian, who restored and established its public buildings. Salamis was finally abandoned only during the Arab invasions of the 7th century. Most of the extant ruins date to the Roman period, and there are very extensive ruins. The theatre, and the gymnasium have been extensively restored. Numerous statues are displayed in the central court of the gymnasium most of which are headless. There are baths, public latrines,various little bits of mosaic, a harbour wall, a Hellenistic and Roman agora and a temple of Zeus that had the right to grant asylum. 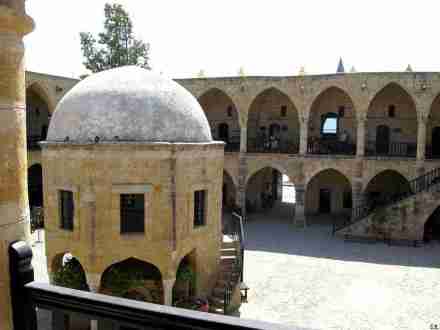 Buyuk Han (the Great Inn) is the largest caravansarai on the island of Cyprus and is considered to be one of the finest buildings on the island. Located in North Nicosia, Northern Cyprus, it was built by the Ottomans in 1572, the year after they had seized Cyprus from the Venetians. In the centre of the open courtyard is a mosque with a fountain for pre-prayer ablutions. It became the first city prison under Britis administration but reverted in 1893 to a hostel for poor families. After spending most of the 1990 being restored, the inn has been revived as a thriving arts centre, consisting of several galleries and workshops. There are also several courtyard cafes and souvenir shops.