This is the third and last appointment before saying “goodbye” to Fuerteventura: after crossing the hinterland, today we’ll explore the north of the island. Are you ready?Let’s go!

Corralejo has recovered pretty well in times and nowadays remains one of the most popular resorts on the island. It was once a small fishing village, now growned into a lively colourful small town. Luckily, Corralejo has managed to retain its original charm and atmosphere, and there are still white sandy beaches near the town centre, where you can ‘drop down’ and soak up the Canarian sunshine. 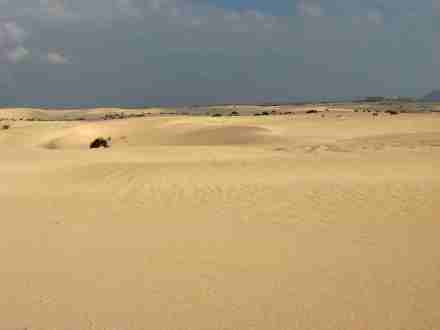 Near Corralejo, more exactly just beyond the town, there is a natural protected reserve of Sahara’s sand dunes. The dunes spread for miles along the east coast and this is what makes Corralejo such a popular resort. No building work is obviously allowed on this area. We suggest, after rolling along the dunes, to stroll around Corralejo streets, where you can still find some of the original houses in Corralejo: these are simple and quaint but most have now been transformed into shops and restaurants.

Following the road signs in the area you’ll arrive in El Cotillo, (pronounced ‘El Coateeyo’) a small rustic little fishing village, dedicated to the Virgin of good travel (Virgin de Buen Viaje). Situated on the northwest corner of Fuerteventura, El Cotillo is a peaceful place but it offers some good accommodations. If you turn left at the end of the main road in Cotillo, you’ll go ahead towards the cliffs: from here there are several footpaths that lead down to the Playa del Castillo, one of the nicest beaches in this region: here you’ll find nothing but steely blue sky, dark blue ocean with white foam, and fine white sand. This is truly the surfing and windsurfing Mecca of the island. 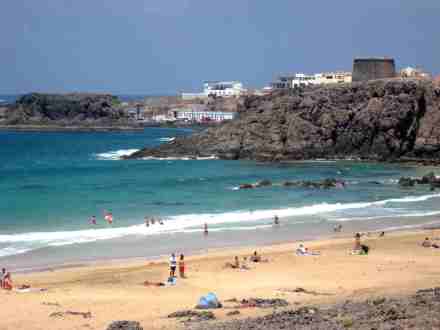 The best advice here is to only enter the water if the waves are reasonably gentle-looking. This is normally during the summer months. If it’s windy, (a lot of the time it is!) there are several nice places for sheltered sunbathing between the lava stones. The area along the cliff tops is really only suited for four-wheel-drive vehicles which can easily travel along the rough roads. Most of these superb white beaches with crystal clear lagoons have pedestrian access. On the cliffs near to the town center, south of the harbor and overlooking the sea, is the Fortaleza del Tostón: this round shaped fort was built in the late 1790’s to defend against invading pirates. The old harbor, with its small bars and restaurants, is the most picturesque part of town and it is here you’ll find most of the bars and restaurants.

With just a short boatride away from the port of Corralejo you’ll find the Nature Reserve of Lobos almost churchlike in its peace and tranquillity. You’ll have the wonderful view back to Fuerteventura and the chance to spot plants and birds not to be found anywhere else on the planet. Above all, an experience of serenity and privilege awaits those that make the little effort required. To reach it,there are some small boats that do go to Lobos, every thirty minutes.In days gone by, Lobos was home to a dense populations of seals – ‘lobos del mar’ (Sea Wolves) hence the island’s name.Today it’s home to different seabirds that nest in the cliffs and rocks.

To end the tour in the heart of the island, we made a short visit in the county seat, Puerto del Rosario: it is a small town with a quiet city center, with graceful houses with coloured walls or windows. This is the commercial center of the island, with the airport and the commercial port.
Despite that, last year we found many shops closed and abandoned by people who move permanently to Spain. We felt sorry for this, because we understood that the economical crisis reached also these islands, even if supported by tourism.