Hello! How are you doing? Finally I’m ready to go on showing you another step of our tour of Yucatan Peninsula. We finally reach one of the most famous Mayan archeological site, and you sure will recognized it trought this photo. 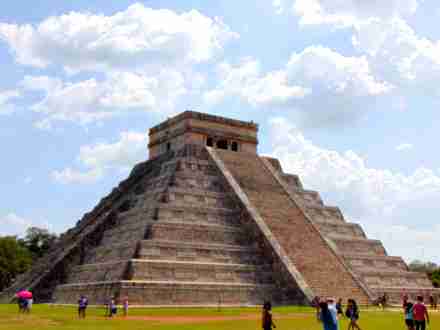 Chichen Itza – which means “at the mouth of the well of Itza“-, is the 2nd most visited archeological site of México today. The Kukulkan Pyramid in Chichen-Itza, known as “El Castillo”, is one of the new seven wonders of the world elected in 2007. It is exactly 24 meters high considering the upper platform. Apart from the Kukulkan Pyramid, in Chichen Itza there many other archaeological spots to visit, all carrying traces of Mayan Culture.

Kukulkan Pyramid was built for astronomical purposes. There is a well-known event regarding this monument: during the vernal equinox (March 20) and the autumnal equinox (September 21) at about 3pm, the sunlight bathes the western balustrade of the pyramid’s main stairway. This causes 7 isosceles triangles to form imitating the body of a snake – roughly 37 yards long – that creeps downwards until it joins the huge snake’s head carved in stone at the bottom of the stairway. Mexican researchers call it “the symbolic descent of Kukulkan” (it means the feathered serpent), and believe it could have been connected with agricultural fecundity rituals.

The Mayans were great sportsmen and build huge ballcourts to play all their games. The Great Ballcourt of Chichen Itza is 225 feet wide and 545 feet long overall. It has no discontinuity between the walls and it’s totally open to the blue sky. Each end of the field present a stairway to the temple area. Between the two extremities there is a terrific acoustics: a whisper can be heard clearly enough at the other end -500 feet far away- and through the length of the court.

The sound waves are unaffected by wind direction or time of the day. In 1931 Leopold Stokowski spent 4 days at this site to determine the acoustic basics that could be applied to theaters for an open-air concert he was designing. Stokowski failed to learn the secret. Even today it has not yet been explained.
It’s easy to imagine a Mayan King sitting here presiding over the games. Legends say that the winning captain would present his own head to the losing captain, who decapitates him. While this may seem a very strange reward, the Mayans considered this to be as the ultimate honor.
Infact in this way, the winning captain reached directly heavens, instead of going through the 13 high steps that the Mayan’s believed they had to go through in order to reach peaceful heaven.

Continuing the exploration of the site, you’ll quick arrive to the “Cenote Sagrado” (Sacred Cenote): it was a place of pilgrimage for ancient Maya people. Archaeological investigations state that thousands of objects have been removed from the bottom of the Sacred Cenote, including material such as shell, gold, jade, wood, obsidian, cloth, as well as skeletons of men and children. – remember that cenotes were the connection between the real world and the spiritual one –
The Yucatan Peninsula is a limestone plain, with no rivers. The region is pockmarked with natural waterhole (cenotes) which expose the water table to the surface. One of the most impressive is the Sacred Cenote, which was special to the people for its social and religious significance. Sometimes the sacrifice of human life was part of the offerings made to the Rain God Chaac, but it was not as common as imagined. 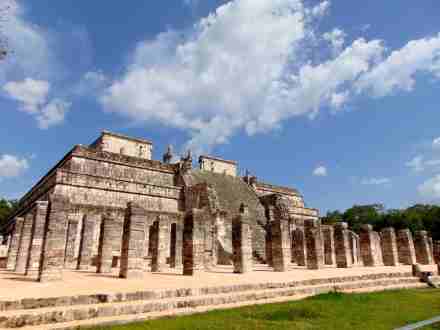 The second main building, right after Kukulkan Pyramid, is the “Templo de los Guerreros “(Temple of the Warriors), one of the most impressive structures in Chichen Itza. The temple consists of four platforms, flanked on the south and west sides by 200 round and square columns. Each side of each column has a carved depiction of a Toltec warrior. These columns once were painted, and some of the pigment is still faintly visible today.

There are also several rows of columns that fill the colonnades on the south of the temple, prompting the name of “Plaza of a Thousand Columns”. The columns at one time supported what was believed to be a thatched roof. A single, wide staircase climbs up the front face of the temple and at the top sits a Chac Mool. Behind Chac Mool there are two carved pillars representing Kukulcan serpent heads with their mouths open and their stone bodies shooting skyward to support the lintels that formed the entrance to what once was a covered structure. These twin carvings are typical of the Toltec influence on the Maya and almost identical designs of Kukulcan can be found at the portico to the upper temple of El Castillo and also in the Upper Temple of the Jaguar, overlooking the Great Ball Court.

A girl travelling around the world on a motorcycle.