Hello!Today I’ll bring you to two small town in the heart of Switzerland: two quiet and discrete big villages, where the time seems to stop. Strolling through the narrow streets of this two orderly places, you could feel the peacefulness and the accuracy that are always associated with Swiss people. (they’re not just stereotypes) 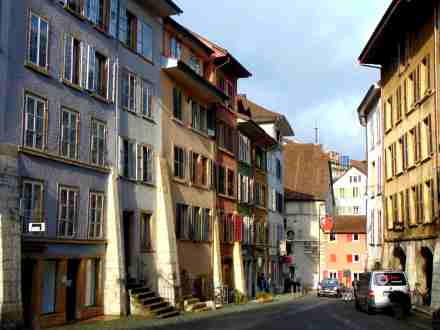 The city of Bienne (or Biel), famous for the clockmaking, is located at the eastern far end of the namesake lake, in the beautiful Seeland (Lakes Area). The charm of bilingualism, the perfect conditions of the city center, and the strategic position between the three lakes at the feet of Giura Mountains (Bienne, Neuchâtel e Murten) make this city a quite interesting stop-over of a pleasant itinerary.

Bienne is the biggest swiss city in which the utilisation of French and German language is totally equalized. This situation of “cultures mixing”, as you can imagine, brings to a certain open-mindedness of the inhabitants.

Architecturally, Bienne presents several aspects. The modern city is located near the lake bank, while the city center, with its gothic church from the 15th century, grow on a small hill. At first sight, I totally felt in love with the colours of its facades, the tiny alleys, the characteristics rooftops: if I think about it now, some sights of this city reminded me to Brittany. 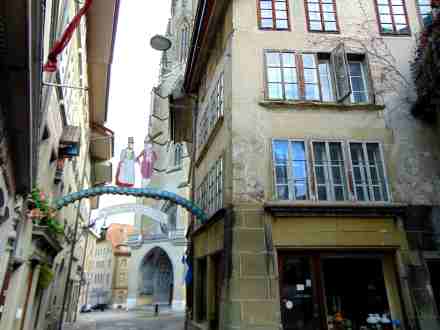 Fribourg is the capital of the Swiss canton of Fribourg and the district La Sarine. It is located on both sides of the river Saane (Sarine), on the Swiss plateau, and is an important center on the cultural border between German and French Switzerland (Romandy). Its Old City, one of the best maintained in Switzerland, sits on a small rocky hill above the valley of the Sarine.

Its most striking architectural element is with no doubt the Cathedral, dedicated to St. Nicolas, with its outstanding stained glass windows. The construction started in 1283 and developed in different phases; it boasts a tower about 74 meters high, from which you can enjoy a 360-degree views.

A surrounding wall, about two km lenght, defended the city in ancient times; its existence is proved by ruins of walls, towers and a big bastion, still preserved nowadays. Several unique gothic facades of the XV century, give to the city center a matchless medieval charm.

4 thoughts on “IN THE HEART OF SWITZERLAND”

A travel blog who shares impactful travel guides, stories and inspiration for all adventurous travellers.

A girl travelling around the world on a motorcycle.