Going on speaking about the temples we visited in Bangkok, I wish to tell you soemthing about, for example, the famous Wat Arun, the Temple of Dawn. Unluckly some months ago, it was partially under maintainance, but sure it worth the visit.

Wat Arun, locally known as Wat Chaeng, is located on the west bank of the Chao Phraya River (Thonburi). It’s easily one of the most stunning temples in Bangkok, not only for its riverside location, but also because the design is very different compared to the other temples you could visit in Bangkok. Wat Arun is partly made up of colourfully decorated spires and stands majestically over the water. It’s very easy to reach from Sapphan Taksin boat pier: you can take a river boat that stops at pier Ta Tian, and then from here a small shuttle boat takes you from one side of the river to the other. 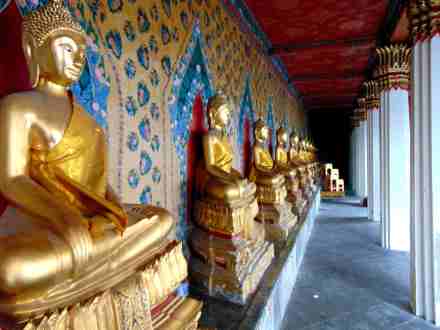 Although it is known as the Temple of the Dawn, it’s absolutely stunning at sunset, particularly when lit up at night. Given beauty of the architecture and the fine craftsmanship, it is not surprising that Wat Arun is considered by many as one of the most beautiful temples in Thailand. The spire (prang) on the bank of Chao Phraya River is one of Bangkok’s world-famous landmarks. It has an imposing khmer-style spire over 70 metres high, beautifully decorated with tiny pieces of coloured glass and Chinese porcelain, placed delicately into intricate patterns.
You can climb the central prang if you wish, the steps are very steep but there is a railing to balance yourself. When you reach the highest point you can see the Chao Phraya River and the Grand Palace and Wat Pho opposite. Along the base of this central tower there are sculptures of Chinese soldiers and animals. Afterwards, head into the ordination hall, where you can admire a golden Buddha image and the detailed murals that decorate the walls. Although Wat Arun is a very popular for tourists, it is also an important place of worship for Buddhists. Make sure you dress appropriately, or pick up one of the cover ups for rent near the entrance.

We had also an exciting experience here: we received the “blessing” of a Buddhist monk, who recited prayers while we was asked to bow down several times in front of him. At the end of the ritual, he gave us a white rope bracelet – tied on the left arm for women, on the right one for men – supposed to bring us happiness and prosperity. Even if my religion is different, I was very touched by the solemnity of the moment, because I’ve clearly perceived to be treated with equality, no matter where I was coming from and my own faith. After that, I felt really peacefull inside.

Wat Arun was envisioned by King Taksin in 1768. It is believed that after fighting his way out of Ayutthaya, which was taken over by a Burmese army at the time, he arrived at this temple just as dawn was breaking. He later had the temple renovated and renamed it Wat Chaeng, the Temple of the Dawn. It used to be the home of the Emerald Buddha, before the Palace was moved to the other side of the river. This can now be seen at the Grand Palace. The central prang was extended during the reign of Rama III (between 1824 and 1851), and is now one of the most visited sites in Thailand. It was also Rama III who added the decoration of the spires with porcelain, so that they glimmer in the sunshine. 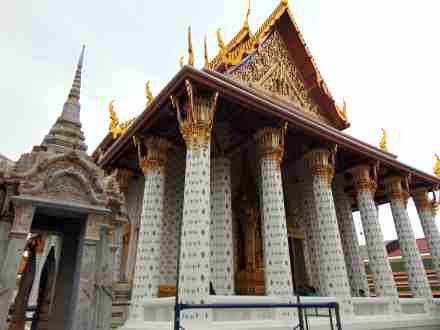 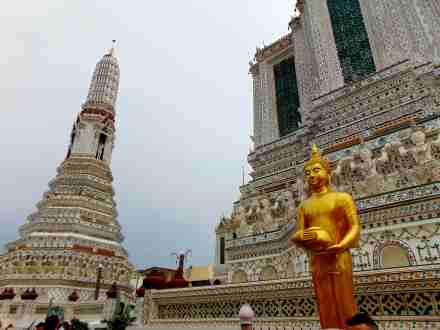